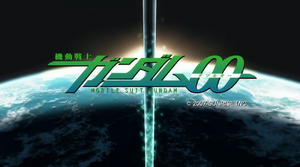 Mobile Suit Gundam 00 (機動戦士ガンダム00（ダブルオー）, Kidousenshi Gandamu Daburuō) is the seventh incarnation of the long running Gundam anime series. Gundam 00 is directed by Seiji Mizushima and written by Yōsuke Kuroda, with character designs done by Yun Kōga. The show consists of two seasons, with 25 episodes each. The first season aired on the Mainichi Broadcasting System and Tokyo Broadcasting System from October 5, 2007 to March 29, 2008. The second season began on October 5, 2008 and concluded on March 29, 2009. A movie sequel was later premiered in Japan and other designated Asian countries in September 18, 2010. Mobile Suit Gundam 00 is the first Gundam series to be animated in widescreen and in high-definition, as well as the first to be set in the futuristic Anno Domini era.

The year is 2307 A.D. Although fossil fuels have been depleted, humanity has obtained a new source of energy to replace them, in the form of a large-scale solar power generation system based on three huge orbital elevators. These three orbital elevators belong to three superpower blocs; the Union, the Human Reform League, and the AEU. However, the benefits of this system are available only to a handful of major powers and their allies. In addition, these superpower blocs continue to play a grand zero-sum game for the sake of their own prestige and prosperity. Thus, even in the 24th Century, humanity has yet to come together as one. In this world of never-ending conflict, a private armed organization appears, dedicated to the elimination of war through armed force. Its name is Celestial Being. In possession of mobile weapons, the Gundam, they begin an armed intervention against all acts of war.

The year is 2312 A.D., four years after the final battle between Celestial Being and the United Nations Forces. Humanity is in the verge of unifying with the establishment of Earth Sphere Federation Government. To further this goal, the Autonomous Peacekeeping Force, also known as the A-Laws, was established to unify the nations and the will of mankind. However, away from the public eyes are only oppressive government policies and ideologies in the name of unity. Seeing all these, Setsuna F. Seiei returns to fight again with his Gundam.

This article is a stub. You can help Gundam 00 Wiki by expanding it.

Retrieved from "https://gundam00.fandom.com/wiki/Mobile_Suit_Gundam_00?oldid=5752"
Community content is available under CC-BY-SA unless otherwise noted.